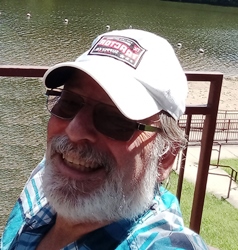 David Pool, 65 of Carlyle, passed away on Saturday, October 1, 2022, at St. Louis University Hospital in St. Louis, Missouri. He was born on May 8, 1957, in East St. Louis, Illinois, the son of Curtis and Daisy, nee Johnson, Pool. He married Mary Louise Essen on May 12, 2018 in Carlyle, Illinois, and she survives in Carlyle.

He was preceded in death by his father Curtis Pool and mother Daisy Pool.

David was a friend to all who met him. If someone needed help in any way, he would immediately be there. He enjoyed his tools and tinkering at his workbench. He liked being a handyman. He would help anyone who needed anything done around his or her house. David was a board member of the Clinton County Historical Society. He appreciated the society’s museum and being with all of its members. He was often seen at the museum doing everything from maintenance work to hosting book sales, open houses, and monthly movie nights to building the society’s floats for the Clinton County Parade. David enjoyed taking fun road trips with his wife Mary Louise especially down to the Shawnee Forest. He liked spending time at their camper at Tomahawk Campground in Pocahontas, Illinois. He loved dancing with his wife and sitting outdoors listening to music. David had a passion for motorcycles, jeeps, and classic cars and trucks. He loved to hear the roar of a Harley and often wished he could have ridden one just one more time.

A celebration of David’s life will be held at the American Legion in Albers, Illinois, on Saturday, October 29th from 1 p.m. to 4 p.m. The interment will be held privately at the Carlyle Cemetery.

In lieu of flowers and gifts, memorial donations may be made in his name to the Clinton County Historical Society and will be received at Nordike Funeral Home, 740 Fairfax Street, Carlyle, IL 62231.

Online condolences may be made to David’s family by visiting www.nordikefuneralhome.com.