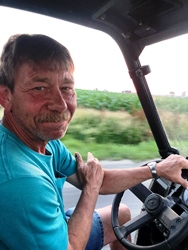 In addition to his parents and wife he is preceded in death by dear friend, Brian Brandmeyer.

Mr. Athmer was a builder for EFI-Solutions in Centralia. He was a member of St. George Parish in New Baden. Daryl enjoyed side by side riding, hunting, and spending time with his family and friends, but especially his grandchildren.

Memorials may be made to Riding for a Reason or to the wishes of the family and will be received at the funeral home.

Condolences may be sent to the family at www.nordikefuneralhome.com