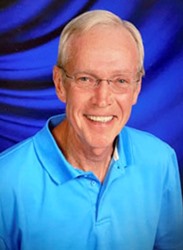 Mark Beatty of The Villages, Fla. (formerly from Greenville, Ill.) passed peacefully at age 73 surrounded by family on Wednesday, Nov. 9, 2022.

Mark was born in E. St. Louis, Ill. in 1949. He grew up in Caseyville, Ill. and attended Southern Illinois University Edwardsville (SIUE) where he received a BS degree in biology and an MBA in finance. His major vocation was banking, where he last served as President of First Bank in Greenville, Ill.

Mark’s greatest passion was music. He was classically trained and later received some of his jazz training at the Red Carpet Lounge in E. St. Louis, Ill. (that is what he always said ☺). He played in the SIUE jazz band and the Air National Guard Band at Lambert Field, starred in pop and jazz with various groups, and played for several bands in The Villages. He played piano and organ throughout his life for numerous churches. Mark was also a wonderful dance partner. He taught ballroom dance classes for a local community college.

“I’ll miss Dad’s sense of humor including his spontaneous belly laughs. I was blessed by his patience and sage advice. I’ll miss his music. There’s not much I wouldn’t give to hear him play the piano one more time. Dad and his music made the world a better place,” said his son, Keith.

His daughter, Jan, said, “I will miss my dad beyond words. Of all the wonderful music my dad played over the years, his favorite hymn that’s sitting on his keyboard stand even now was It Is Well with My Soul. I’ve found much comfort in these words the last few days. Dad showed love in so many ways–especially acts of service–and was someone you could always count on. Thank you, Dad, for being present and loving us so well.”

“Being Mark’s wife was a true blessing. We shared the love of music and complemented each other in many ways for 45 years. We loved spending time with our grandchildren, enjoyed learning to play pickleball, and were privileged to have the greatest two kids. Both of them married well and gave us the most terrific grandkids! We were so grateful to have many wonderful friends throughout our lives. We all will miss him dearly—but, what an honor to have known him and to have had him in our lives,” said his wife, Kathy.