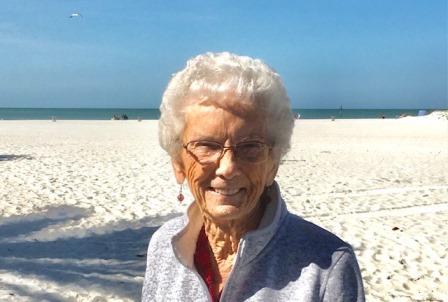 Visitation will be held Sunday, December 4, 2022, from 1:00 to 3:00 pm at Donnell – Wiegand Funeral Home. Funeral services will follow immediately after with Pastor Jerry Bennett officiating. Interment will follow at Mt. Auburn Cemetery. Memorials may be made to St Peter UCC, Hookdale, Illinois, or the charity of your choice.

Genevieve June, the daughter of John and Ethel (Farley) Odle, was born March 13, 1927, in Roy, New Mexico. Genny grew up in Stockton, CA. In 1943 she met Eldon Ennen in San Francisco while they were working in an aircraft factory. They were married in Reno, Nevada on August 30, 1943. They enjoyed 68 years together. Eldon passed away December 17, 2011.

Genny worked side by side with Eldon on the Centennial family dairy and grain farm. Genny was a faithful member of St Peter UCC, she was active in Bond County Home Extension, Stitchery Club, and Cuisine Quilters. Genny enjoyed cooking, sewing, dancing, golf, reading, traveling, and especially the beach.

Surviving are their children: Jan Ennen of Maryville, Roger Ennen of Smithboro, and grandson: Devin Kimbro of Smithboro. She is also survived by her brother: Kenneth Odle of Stockton, CA and sister-in-law, Joyce Ennen of Greenville.

Genny was preceded in death by a son and daughter in infancy, her parents, husband Eldon, brother Donald Odle, sisters Loretta Odle and Barbara Barr.

To share a memory or leave a condolence, visit www.donnellwiegand.com.