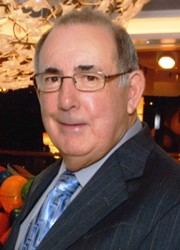 He was born February 4, 1940, to Richard and Ruby (nee Zolman) Bannister in Farmington, MO. He married Betty Chilton on November 26, 1960, at Memorial Methodist Church, Farmington, MO.

Roger grew up in Farmington, MO and graduated from Farmington High School in 1958. He then attended Flat River Junior College, where he majored in Business. Roger worked for P.N. Hirsch & Company, a St. Louis-based chain of small department stores. His job meant he and Betty lived in numerous midwestern towns before settling down in Highland in 1966.

Roger started work for B-Line Systems in Highland in 1969, first as a Shipping Foreman, then as Plant Superintendant, and retiring after 33 years, in 2002, as Traffic Manager. He had a tremendous work ethic but loved having fun as well. Roger put his all into everything he did.

He had a wonderful sense of humor, liked to make people laugh, and always enjoyed a good time.

Roger loved fishing and enjoyed taking his girls to the Highland City Lake in their younger years. Over the years, he spent many Sunday afternoons fishing with friends on local lakes in his fishing boat. He took many fishing trips to Canada with his friends, returning with a commemorative baseball cap each time. Roger furnished, and cooked, all the fish for the annual family fish fry.

Roger led an active life and enjoyed swimming at the Rec. Center three times a week, playing golf twice weekly during the season, and playing ping pong. He and Betty shared a love of travel and were especially fond of cruises. They visited the Panama Canal, Alaska, California, Mexico, and the Caribbean, to name a few destinations.

Roger loved spending time with his family. He and Betty hosted frequent family gatherings, which always ended with a good round of cards or dominoes. A more recent tradition, the family began an annual trip to Bull Shoals Lake in Arkansas.

He attended Evangelical United Church of Christ with Betty, liked playing ping pong with the “Old Farts Ping Pong Club”, and was a member of the Highland Country Club, an avid golfer,
Roger was senior club champion twice.

Memorials may be made to the Evangelical United Church of Christ or HSHS Hospice.

Interment: at a later date