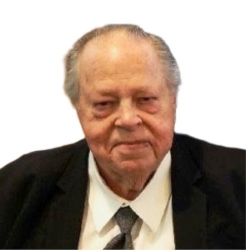 Bobby Eugene Masterson, age 82, of Damainsville passed away on Thursday, January 19, 2023, at Carlyle Healthcare Center. He was born on January 26, 1940, the son of Truman and Abbie (Perciful) Masterson. His wife, Norma Jean Masterson preceded him in death on April 15, 1973 and he married Diane Santel in Damainsville on April 25, 1975 and she survives in Damiansville.

He was preceded in death by his mother, father, wife and daughter, Pamela Masterson; siblings Imogene and Bonnie Mae Masterson and Leila Weaver; numerous brothers and sisters in law in the Masterson, Dall and Santel family.

Bobby enjoyed playing card games and was very proud of his tactical expertise in euchre. He also hunted and fished in his younger days although he often caught more beers than deers, rabbits or catfish. He loved having a garden, family gatherings and entertaining his grandchildren with Donald Duck imitations. Some of his favorite past times included watching TV Land and the Game Show Network, armchair sports analysis, and playing the poker machines. He particularly disliked beets, pumpkin, or going to the mailbox.

Bobby was in the National Guard in his early years. He then worked for many years at Empire Stove in Belleville followed by several years with Continental Grain. He retired as a trucker from Landstar. He was a staunch union supporter and member.

A celebration of life will be held on his birthday at 11:00 AM on Thursday, January 26, 2023 at Nordike Funeral Home in New Baden. Interment will follow at Resurrection Cemetery in New Baden.

Visitation will be held prior to the celebration of life on Thursday from 9:00 AM until the time of services at Nordike Funeral Home in New Baden.

In lieu of flowers, the family would like to invite you to donate to Carlyle Healthcare Center’s Memory Wing or Activity Center and will be received at Nordike Funeral Home, 15 East Hanover Street, New Baden, IL 62265.