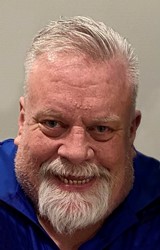 He was born December 7, 1965 in Westminster, CA, a son of the late Mary Ann Tallant, nee Hodges and Jerold J. Thomas, Sr.

In addition to his parents, he was preceded in death by his first wife, Lena, nee Grinstead, Thomas whom he married in 1988 and who died in 1990; sister, Debby Karr; and brother-in-law, Roger Ratliff.

Jim was a veteran of the United States Air Force and served for thirteen years from 1988-2001 achieving the rank of SSGT. He was the Plant Manager at Gilster-Mary Lee Corporation in Centralia. Jim enjoyed golfing, watching football, weight lifting, watching movies, and loved animals, especially dogs and cats.A Graveside Service will be held Monday, January 30, 2023 at 9:30 a.m. at Jefferson Barracks National Cemetery in St. Louis, MO with full military honors accorded and Jim’s nephew, Dr. Rev. Matthew Murphy officiating. (Those in attendance are asked to meet in the parking lot directly behind the Administration Building no later than 9:15 a.m.)

Memorials may be made to This Able Veteran at www.thisableveteran.org (1714 Wolf Creek Rd, Carbondale, IL 62902) and will be received at the service, or by mail Moss Funeral Home, 535 N 5th St. Breese, IL 62230, who is serving the family.