Tiffany Samsoe, a sophomore from Norco, California was named the SLIAC Softball Hitter of the Week. Samsoe put together an impressive week in helping the Panthers pick up four wins. She hit .526 over seven games and finished with three home runs and 10 runs batted in with seven runs scored. She picked up a hit in six of the games including five multi-hit contests. She was 3-for-4 with two home runs and five RBI in a 7-5 win over Wisconsin-Stevens Point. For the week she had a .556 on-base percentage and a 1.040 slugging percentage with 13 hits in 25 at bats.

Nate Wieland, a freshman from Mascoutah, is the SLIAC Men’s Tennis Player of the Week. Wieland had a busy and impressive week, winning eight of ten total matches, going 4-1 in both singles and doubles. He started out with a come from behind win over Messiah at #1 singles. Wieland pulled out another come from behind win at #2 singles against Thomas and closed out with wins against Frostburg State and North Central. In addition Wieland added four wins at #2 doubles with his partner Demetrius Bush. 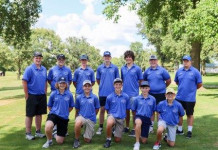