The Comets Varsity celebrated a conference Tuesday over the Miners of Gillespie after the JV was defeated by Alton. Varsity goals were scored by Jonathan Hall, Kyle Sunderland, Caleb Gaffner, and Matt James (2). Assists were from Sunderland (3) and Leihser.

Shots on goal were 10-2 in favor of the Comets, with Noah Matthews only needing to make 1 first half save. The Gillespie goal was scored on a penalty kick.

The final score of the JV game was 2-0 Comets with goals provided by Sam Barber and Gavin Mitchell. Evan Oakley got the shutout in goal, the Comets first in all competitions.

The Varsity team won by a margin of 2-1. They went down early on a rebound goal, but showed great resolve and intestinal fortitude to respond and completely shut the game down. Nicholas Watterson scored a rebound goal in the 18th minute, just 3 minutes after the Comets conceded. The halftime score was 1-1, but the Comets had a clear advantage in shots on goal, possession, and fitness. Our athleticism and willingness to put our bodies on the line for our team went a long way in securing what would later be determined as a victory. At the 57 minute mark, Kyle Sunderland scored on a shot from the right. As the defense gave him room to shoot, he simply shot the ball across the grain and the keeper had no chance to get to it. From that point forward the Comets gave up 0 shots and went on to celebrate a wonderful homecoming victory. Final shots were 22-6 in favor of the Comets, with the shots on goal being 12-3, with the Comets giving up 0 in the entire second half. Noah Matthews earned the win in goal with just 2 saves. It’s always great when you can win a game and your keeper only needs to make 2 saves.

The Comets are now on a 3 game winning streak as they head to action on Saturday. The Varsity will play at Hillsboro in a conference match and the JV will play in the JV Cavie Classic at Carlinville’s Loveless Park. 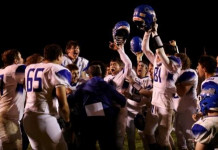