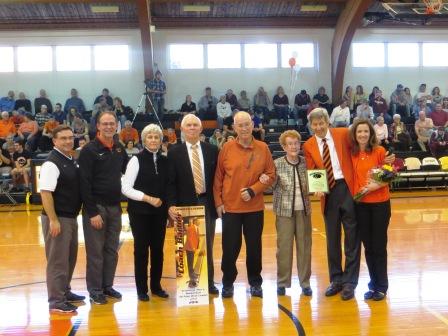 Greenville College Men’s Basketball Coach George Barber was honored Saturday afternoon, prior to his team’s final regular season game, for establishing a school record for coaching wins in a career.

Barber is proud to be a part of Greenville College men’s basketball history. He said it’s an amazing thing to be a part of this community and know that there are six former coaches who watch you, but never put pressure on you.

The Greenville College men’s and women’s teams are both seeded second in their conference tournaments. Only four teams qualify for each of the tournaments.

The Panther men play Thursday at 6 p.m. against Westminster in Jacksonville.

The Lady Panthers go up against Spalding at 6 p.m. Friday at Westminster. Missouri.

Championship games at the tournaments are Saturday.