The Greenville Comets baseball team evened its record at 2 and 2 with an 8 to 5 home win over Vandalia Wednesday afternoon.

The Comets led 6 to 2 after five innings, then Vandalia came up with three runs in the top of the 6th to make it 6 to 5.

The play of the game was a diving catch by right-fielder Lucas Carlson, with the bases loaded and two outs in the 6th, for the final out of the inning.

Ryan Hutchinson was the starting and winning pitcher. Christian Moss earned the save.

Offensively for the Comets, Dillon Hallemann cracked a two-run triple and Moss had a two-run double. Josh Pierce and Hallemann had two hits apiece while Ty Sexton, Hutchinson, and Blake Doll posted one hit each.

The baseball Comets play a home double header on Saturday with the first game beginning at 10 a.m. Columbia and Teutopolis are the opponents. 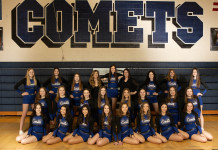