JARRID WILLIAMS – SLIAC MEN’S FIELD ATHLETE OF THE WEEK
This week’s SLIAC Men’s Field Performer of the Week is Jarrid Williams from Greenville College. Williams, a junior from Lovejoy, Ga., had a pair of top three finishes at the Rose Hulman Twilight Meet. Williams placed second in the triple jump with a distance of 45’3″, his second best jump of the season. He also took third place in the long jump with a mark of 20’9.25″, ranking him fourth in the conference on the spring season.

NATHAN POTTS – SLIAC MEN’S TRACK ATHLETE OF THE WEEK
Nathan Potts is the SLIAC Track Performer of the Week after an impressive day at the Rose Hulman Twilight Meet. He finished 4th in the 800 meter race, setting a personal record in just his second year competing in the event. Potts also took second place in the 4×400 relay that finished in 3:21.63; nearly eight seconds better than the nearest SLIAC relay team.

MARIDETH TATE – SLIAC WOMEN’S FIELD ATHLETE OF THE WEEK
Marideth Tate, a sophomore, is this week’s SLIAC Women’s Field Athlete of the Week. Tate had two top five finishes at the Rose Hulman Twilight Meet last weekend. Tate took second place in the hammer throw with a distance of 137’06”, a personal best and the longest distance in the SLIAC this season. She also finished fifth in the shot put at the event with a distance of 35’1.75″, ranking third in the conference this season.

MOLLY WORKS – SLIAC WOMEN’S TRACK ATHLETE OF THE WEEK
Molly Works, a senior from Lenzburg, Ill., is the SLIAC Women’s Track Performer of the Week after taking over the top spot in the conference in the 3000 steeplechase event this season. Works placed first at the Rose Hulman Twilight Meet in the event with a time of 11:56, a season best by 19 seconds and a conference best by over a minute.

HONORABLE MENTIONS (Both for baseball)
Nate Miller went 10-for-18 on the week, driving in nine runs and scoring six over five games.

Jonah Moore picked up a seven inning win over Principia, allowing just one run while striking out eight. 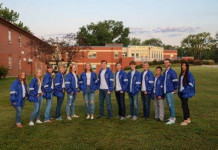