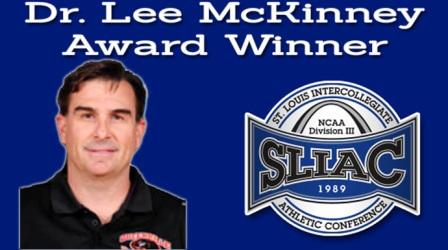 Faulkner has served in numerous roles during his time with Greenville College and been highly involved in representing the SLIAC on various committees. Faulkner is currently the Dean of Professional Studies at Greenville, as well as an Associate Professor of Sports Management and Assistant Women’s Basketball Coach.

Faulkner was named Greenville College Athletic Director in 1999, stepping aside as a head coach to help develop the athletics department as a whole. He was involved in broadening the junior varsity programs at Greenville while also helping lay the foundation for the addition of graduate assistant coaches for nearly all athletic programs. Faulkner spent 15 years as Athletic Director, overseeing various capital improvements for the athletic department; including the renovation of the Fitness Training Center, H.J. Long Gymnasium, Scott Burgess Tennis Complex, Recreation Center, track and field facilities, and playing fields for soccer and baseball. Outside of athletics Faulkner was instrumental in developing the youth ministry program at Greenville College.

As a representative of the SLIAC, Faulkner served on the NCAA Regional Men’s Basketball committee as well as two terms as the Vice President/Vice Chair of the SLIAC and SLIAC President/Chair in 2003 and 2013. He was also a member of SLIAC committees that included working long range planning, revising membership standards, chairman of the championships and awards committee, and the SLIAC Hall of Fame committee.

Faulkner is a 1986 graduate of Greenville College, where he spent four years as a member of the soccer team and one year on the basketball team before graduating with a bachelor of science in physical education and a minor in religion. He completed a master’s degree in sport management at SIU Edwardsville and a doctorate in higher education leadership from Saint Louis University. He also holds a master’s degree in ministry from Bethel College. Faulkner is married to his wife Tara and has two children, Kelley and Craig.

Dr. Doug Faulkner will be presented with the Lee McKinney Distinguished Service Award at the annual SLIAC Awards Banquet this May.

The Lee McKinney SLIAC Distinguished Service Award is presented annually to the individual that has served or competed in the St. Louis Intercollegiate Athletic Conference and best exemplifies the qualities of leadership, dedication, service and perseverance displayed by longtime Fontbonne University director of athletics, Lee McKinney.

Dr. McKinney served as director of athletics at Fontbonne for 23 years, seeing the athletics program at the institution grow from three teams and 19 student-athletes when he arrived in 1988 to 19 teams and over 350 student-athletes at the time of his retirement. Dr. McKinney was instrumental in the formation of the St. Louis Intercollegiate Athletic Conference as he joined representatives from Blackburn College, Maryville University, Parks College, Principia College and Webster University in chartering the Conference in September 1989.

During his years of service to the Conference, Dr. McKinney chaired the SLIAC Administrative Council and represented the Conference nationally, serving on the NCAA Management Council, Financial Aid Committee and Nominating Committee.