The Blue Jays fell behind, 2-1, after the first inning, then took the lead with two in the second and four runs in the fifth.

Curry was the winning pitcher. 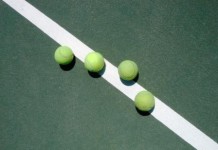