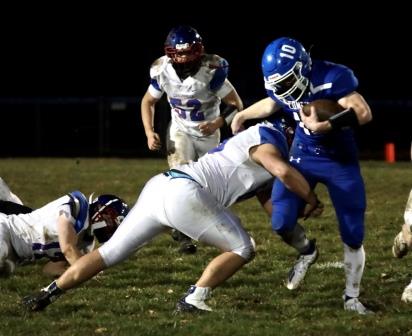 The Comets stayed close most of the way, but hurt themselves with key penalties and turnovers on pass interceptions.

It was a 14-0 Carlinville lead after the Cavaliers returned an interception 62 yards for a TD.

Nathan Grull scored on a four-yard run late in the second quarter, then got into the end zone on the extra point play to make it 14-8 at halftime.

The visitors stretched their lead to 21-8 at the 5:40 mark in the third quarter. The Comets came right back and scored, with the big play being a 67-yard pass play from Jack Schaufelberger to Tommy Baker.

Grull then scored again on a three yard run and the Comets were closer at 21-14, late in the third quarter.

Another Carlinville interception, accompanied by a long return, put the ball on the one yard line, then Carlinville recorded its fourth TD of the night to seal the win.

Comets’ running back Grull was a workhorse, carrying the football 32 times for 111 yards. Jack Schaufelberger and Ryan Jackson shared quarterback duties with Schaufelberger completing eight of 19 passes for 118 yards.

Baker caught five of those passes for 91 yards.

Carlinville’s Bobby Seal had 34 carries for 166 yards and the Cavaliers completed nine of 17 passes for 97 yards,

On defense, the Comets’ Davin Johnson intercepted a pass.

End Of Season For GHS Soccer