After a scoreless game in regulation time, both teams recorded three goals in penalty kicks. Scoring for GHS were Nolan Tabor, Judah Liss and Lucas Field.

Greenville plays in the regional Friday at 4 p.m. at Staunton.

A victory for the Comets puts them in a regional semifinal game at Greenville, 4 p.m. October 12 against Mater Dei. 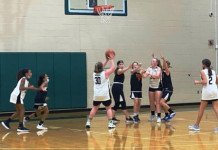