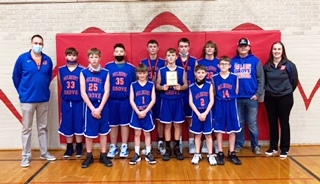 The Eagles defeated Mt. Olive, 42-23, in the semifinals, and dropped the championship game to Wood River Lewis and Clark, 28-25.

In the win, the Eagles were led in scoring by Jackson Icenogle with 19 points and Connor Hartmann with 13.

Selected to the all-tournament team were Hartmann and Jackson Icenogle.