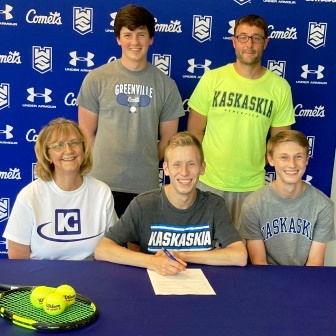 When Coach Basch was asked how he envisions Dima fitting into his program, he said, “He came and visited, was able to hit with pretty much the whole guys from last year’s team, and I think he’ll definitely fit in. The fitness level is extremely high, so he’s going to be able to play those long marathon matches. We have a lot of returning players, but we need to add some more depth. We’ll have a full roster of nine players, and I think he’ll fit somewhere in our top six for sure.”

Dima told WGEL he is ready to further his tennis career. Although he did not expect to play college tennis, he had a successful tennis career in high school and wanted to pursue the sport in college. Dima loves the one-on-one, competitive aspect of tennis, and he has a passion for the game.

Dima Powell plans to complete a two-year degree at Kaskaskia College, then transfer to a four-year college to get a sports management degree.