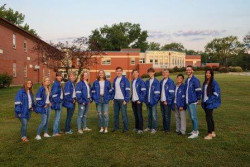 Cross country runners from Greenville High School were in the Carlinville Invitational Tuesday.

The Lady Comets finished fourth out of six teams.

Katie Campbell, from the GHS squad, was the ninth best individual runner in the race. There were 66 female runners on the course.

In boys’ action, the Comets were last out of the eight teams competing.