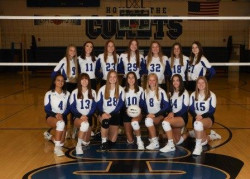 The Greenville Lady Comets volleyball teams travelled to Wesclin Tuesday night and were defeated by the Warriors.

Statistical leaders were Lilly Funneman with four kills and a block, Kat Haas with three kills, Ava Curry with 12 digs and an ace, Tessa Neely with 10 digs, Claire Dannaman with nine assists and Sydnee Godier with two assists.

The freshman Lady Comets took Wesclin to three games before falling. After winning the opening game, 21-19, the GHS squad lost the next two, 15-21, 7-15.