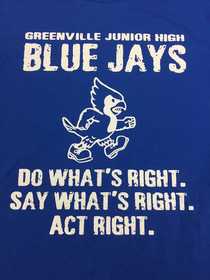 The eighth grade Blue Jays posted a 36-22 victory, scoring half of their points in the first quarter. It was a 22-13 margin at halftime for the Jays, and they stayed in front the second half.

The Jays led 13-6 at halftime, but the Dragons came back and got to within one point going into the final quarter. Greenville outscored the visitors 10-3 in the final six minutes.

Leading the Blue Jays in scoring were Cannon Hamel with nine points, and Aiden Linnabary and Christian Swalley had six apiece.