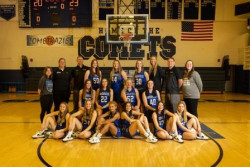 The Greenville Lady Comets rallied from a nine point deficit in the final quarter to grab a big win at home over Carlyle Tuesday night.

The Greenville High girls outscored Carlyle 27-13 in the fourth quarter to come away with a 58-50 victory.

The home squad led most of the first half thanks mostly to five three-pointers by Charlee Stearns and seven points by Lilly Funneman.

Carlyle held the Lady Comets to six points in the third quarter and led by six going into the final frame.

The Lady Indians were on top 46-39 with 4:50 left to play, then the GHS girls began their rally. The Lady Comets scored 19 of the last 23 points to win by eight.

Katie Campbell had a big fourth quarter, scoring 17 points and going eight for eight at the free throw line in the final eight minutes. Also during the comeback, Emma Veith had a key steal and field goal.

Greenville finished the game 12 of 15 at the line and made eight three-pointers. Carlyle sank 12 of 17 free throws.

The win gives the Lady Comets a 4-4 record. They host North Mac Thursday night in a game to be broadcast on WGEL.

The junior varsity Lady Comets are 5-0 for the season after a come-from-behind win over Carlyle 39-35.

The GHS team outscored the Lady Indians 13-2 in the fourth quarter. Leading scorers for the Lady Comets were Kylie Doll and Haylee Clark with 11 points apiece.