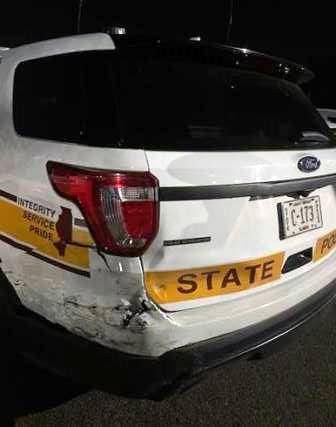 Illinois State Police (ISP) officials investigated two separate Scott’s Law Violations that occurred within a few hours apart. One violation involved a traffic crash with an ISP squad car in Chicago, and in the second violation, almost struck an ISP trooper in Collinsville.

On Wednesday, September 20, 2022, at approximately 11:47 p.m., an ISP District Chicago Trooper was conducting traffic control for a crash on Interstate 90 southbound at Addison Street in Cook County. The squad car was stationary with the emergency lights activated in the far-right lane. A 2008 Black Mazda driven by Jessica Allen, a 32-year-old female of Chicago, IL, failed to yield to the stationary emergency vehicle and struck the rear of the ISP squad car. Neither Allan nor the Trooper were injured in the crash. Allan was cited for a violation of Scott’s Law – Improper Passing of an Emergency Vehicle, No Insurance, and Failure to Reduce Speed to Avoid an Accident.

On Thursday, September 21, 2022, at approximately 1:02 a.m., an ISP District 11 Trooper was investigating a traffic crash on Interstate 270 westbound at milepost 0.5, Madison County. The squad car was stationary with emergency lights activated. A Truck Tractor Semi-Trailer (TTST) failed to yield to the stationary emergency vehicle and almost struck the Trooper. The Trooper was able to jump out of the way of the TTST and sustained minor abrasions. The TTST continued traveling westbound on Interstate 270. Another Trooper, in the area, was able to stop the driver of the TTST and issue the driver a citation for a violation of Scott’s Law – Improper Passing of an Emergency Vehicle.

There have been 19 ISP squad cars struck in relation to the Move Over Law and seven Troopers have sustained injuries from Move Over Law-related crashes. ISP is reminding the public of the requirements of the Move Over Law, otherwise known as the “Scott’s Law.” When approaching an emergency vehicle, or any vehicle with their emergency or hazard lights activated, drivers are required to slow down AND move over. A person who violates Scott’s Law, commits a business offense and faces a fine of no less than $250 or more than $10,000 for a first offense. If the violation results in injury to another person, the violator’s driver’s license will be suspended for a mandatory period of anywhere between six months and two years. Additional information can be found at https://isp.maps.arcgis.com/apps/MapJournal/index.html?appid=21430274bef64fc5a19d8dcc191ff3f8