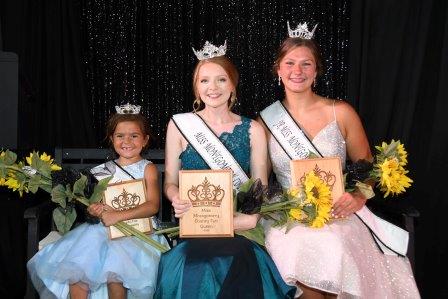 The Montgomery County Fair wrapped up this past weekend. During the opening night festivities, three new faces were chosen to represent the county.

The title of Miss Congeniality went to Paitynn Wilson, of Hillsboro, and Alecia Miller, of Litchfield, was named first runner up.

A new tradition was started this year by pageant directors Kady Pederson and Brielle Marten, who presented the retiring Montgomery County Fair Queen, Summer Smith, with a diamond ring, courtesy of J.C.’s Jewelry & Repair in Hillsboro, to honor her reign.

Congratulations to Madalynn, Ady, and Sawyer.